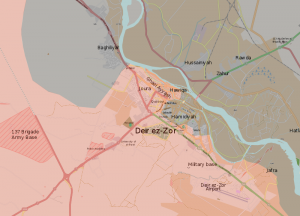 Moscow has begun to admit that some Russian citizens were killed by an American airstrike as they attacked the Conoco Tabiyah oil refinery near Deir ez-Zor, Syria. The refinery was held by Coalition forces, supported by American air power. The Foreign Ministry declared reports of hundreds of Russians killed ‘classic disinformation’.

Russian Foreign Ministry Maria Zakharova declared in a briefing, “We’re not talking about 400, 200, 100 and not 10…According to preliminary data, as a result of armed clashes the cause of which is being ascertained, we could be talking about the deaths of five people, presumably Russian citizens.

“All of this is subject to confirmation, particularly whether they are all citizens of Russia or other countries…I’d like to emphasize once again that we’re not talking about Russian military personnel,” reported The Moscow Times.

The Kremlin has denied any Russian military members were involved in the incident, “We’ve already said all that we could say on this topic, we have nothing to add,” Kremlin spokesman Dmitry Peskov told reporters Thursday, as quoted by the state-run RIA Novosti news agency.

Zakharova also repeated the narrative that the United States is sheltering fighters of the Islamic State, and coming dangerously close to an open confrontation with Syrian forces while supporting Kurdish allies.

“The US military continues to occupy a 55-kilometer area near Al-Tanf, which has become a shelter zone for the remaining members of ISIL [the former name of the Islamic State terror group outlawed in Russia]…The Americans conducted defiant actions on the eastern bank of the Euphrates River, where they came close to an open confrontation with the Syrian army seeking to support their Kurdish allies.”

She pointed out that “the Americans have been provoking Turkey, sending arms convoys for the Kurds through its territory.” “In return, Turkey continues its Operation Olive Branch against the Kurds in the Afrin area. The fighting is fierce…terrorists from the Hayat Tahrir al-Sham group continue aggressive provocations in the western part of the Eastern Ghouta de-escalation zone, particularly shelling Damascus and killing civilians,” reported Russian state news agency TASS.