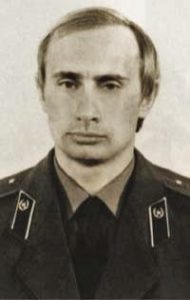 Russian President Vladimir Putin declared yesterday that his time spent as an officer of the KGB prepared him for the office of the presidency of Russia. The Russian leader made the comments while visiting the television news program “Vremya” (Time) in Moscow.

The show is hosted by Channel One TV in Russia and is the premier state news channel. “Vremya” celebrated its 50 year anniversary on New Year’s Day.

Asked whether he had adjusted his behavior since becoming president, Putin said: “As strange as it sounds, no…Yes, I’m in the limelight, but in my previous life I always tried to act as if I was constantly being watched,” he said. “It’s strange, but that’s how it worked out, perhaps because of my previous work,” reported The Moscow Times.

The Russian president pointed out the unveiling of the TU-144 civilian supersonic transport as a moment of wonderment he still remembers. “It felt at the time and continues to feel like some sort of science fiction,” he said. “Even more so back then, it was something unimaginable.”

Putin praised Channel One as “not only rich in information, but it pretty much always was and remains the standard-bearer of reliability.”

The Kremlin has suppressed most independent media in Russia and the state-run channels are in actuality a propaganda arm of the Kremlin.