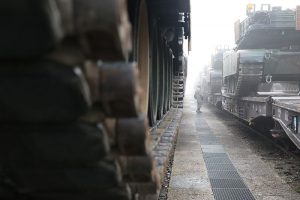 When the last US Abrams battle tanks left Germany in 2013, it marked the end of a 69-year presence, and told of a western military alliance untroubled by potential problems on Europe’s borders. Just a few years later American armour is again fanning out across the continent’s east with a mission not just to show strength to an emboldened Russia, but to test whether the mundane matter of logistics might hobble Nato’s response to any provocative action.

Putin Says KGB Past Prepared Him For Presidency