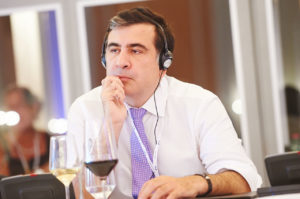 21 MPs and 27 members of Georgia’s United National Movement have announced they are leaving the party today; 31 members of the political council and 5 MPs have decided to remain, including ex-President Mikheil Saakashvili, who is now in the opposition in Ukraine. Those who split from the party declared that a new party would be formed in the following days.

“The rule of losers is over. The party is united and strong as it has never has been during the last 4 years, as tens thousands of activists regained control of it,” Saakashvili commented.

“Sakashvili is the only person responsible for the destruction of the party – the very person who created the party,” remarked Ugulava during the press conference today.

Saakashvili himself is wanted in Georgia for various charges and can not come back to his political home. Those MPs that left have declared despite the fact that UNM lost the elections, they are still competent enough to rule the country, even without ex-leader Mikheil Saakashvili.

The President Of Israel Visits Georgia