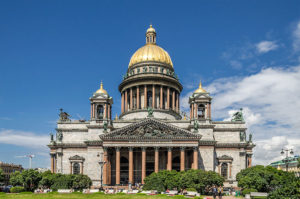 The iconic St. Isaac’s Cathedral in St. Petersburg, will not be turned over to the Russian Orthodox Church as planned. The city of St. Petersburg will stay in control of the structure and rent it free to the church instead. The cathedral was under the control of the Communist Party during the Soviet Union and the church was removed from the facility altogether. Local communists were angry that the cathedral was going to be returned to the church and made their displeasure known through protests. St. Isaac’s is a UNESCO World Heritage site.

“As part of carrying out the federal legislation, the St. Isaac Cathedral will be transferred to the Moscow Patriarchate for free use, still St. Petersburg will remain the owner and the cathedral’s legal status will not change,” the vice governor explained, reports Russian State News Agency TASS.

“The cathedral was built in 1818-1858 and transformed into a museum after the 1917 Bolshevik Revolution. Church services were resumed at St. Isaac’s in 1990.

“However, St. Isaac’s was not property of the Russian Orthodox Church even prior to the revolution since its maintenance was very expensive. The cathedral was managed by the Imperial Ministry of Communication Routes and Public Buildings until 1871 and was then turned over to the Interior Ministry of the Russian Empire,” reports TASS.