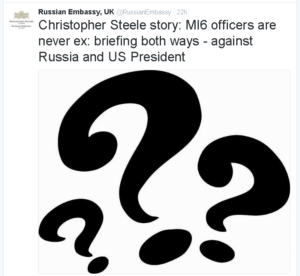 In a Twitter post, the Russian embassy in London suggested the dossier’s author was still working for MI6 and was briefing both ways – Against Mr Trump and Moscow.

An anonymous document that says that some Russian agents allegedly prepared dirt on Trump, was published via BuzzFeed a couple of days ago. The portal claims that the report was made by “a man who identified himself as a former employee of British intelligence.”

On Thursday the name of the author of the report went viral – it was a 52-year-old former employee of MI6, and now co-founder of London-based Orbis Business Intelligence, specializing in investigations and security, Christopher Steele.

According to British media reports, Christopher Steele in the early 1990s was involved in Russian espionage under diplomatic cover. He is known as one of the most eminent Russia specialists in the British Secret Intelligence Service.

According to Putin’s press secretary, Dmitry Peskov, the Kremlin did not have the information about the author of the report and Russia does not intend to continue the discussion of the “fake news.”

President-elect Trump called the dossier ‘fake’ and ‘phony’, even suggesting that US intelligence services had issued it to damage his reputation before his inauguration.