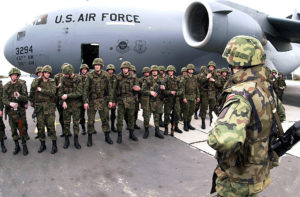 The commanding general of NATO has promised that NATO troops will stay in the region, “as long as necessary”

Chief of the Allied forces in Europe, General Curtis Skaparotti, said that NATO has no plans to withdraw troops from Kosovo.

As reported by Associated Press, the statement was made during a general meeting with the leadership and the ambassadors of Western countries when visiting Pristina.

“We will ensure our presence here in the flexible but resolute forms and we will make changes only after this will help the situation”, – said K. Skaparotti.

At the same time, the General referred to the threat posed by the Russian attempts to “strengthen its influence in the region, particularly through disinformation in the media and political influence.”

Since 1999 in the province there are 4,500 NATO troops to carry out the “operation to enforce peace” during clashes between ethnic Serbs and Albanians living in the autonomy of the former Yugoslavia.

Serbia, which included the Autonomous Province of Kosovo, has not recognized its independence, and insists on the restoration of its sovereignty over this territory.