On Friday May 25 reports emerged that “Six people were injured after violent fights between migrants at the Moria registration center on Lesvos.” The first reports were in Lesvosnews.gr and then at greekreporter.com. The first reports which relied on Greek sources noted “The cause of the violent brawls is not known yet because there is no record of what happened inside the camp.”

But Kurdish media was quick to show that there was more to the “clashes” then just some ordinary “brawl” involving the 7,000 migrants stuffed into the Moria camp. Rudaw reached out to one refugee who provided the following account. “The fight began when some Arab youth started to fight with Kurds over fasting,” Mohammed Khalil, a 19-year-old Kurdish migrant from Kobane in Syria, told Rudaw on Saturday from Lesbos. He continued: “I was fasting yesterday, yet some Arabs from Syria, Iraq, Yemen, and Algeria came and said Rojava [Syrian Kurdistan] Kurds are infidels and don’t fast. Then the fight started. The refugee Arabs went and later came back together. A bloody fight happened.”

Kurdistan24 reported that four Kurds had been killed. They interviewed a different witness. “Syrian and Iraqi Arab refugees in the camp attacked Kurdish families driven by sectarian and ethnic hatred against the Kurds and killed four people. Among them were my cousins Izzat Tarbush and Kaniwar Tarbush as well as Ahmad and Kaniwar from Afrin,” Moro Tarbush, a Syrian Kurdish refugee living in the aforementioned camp, said.

Kurdistan24 later clarified its report: “The Representative of the Kurdistan Democratic Party (KDP) in Greece, Sarbast Mohammed, told Kurdistan 24 that no Kurds had died in clashes that erupted this weekend in a Greek refugee camp. He did, however, confirm that ten were critically injured, all of whom are from Afrin, Kobani, and Sulaimani.” Kurdistan24 then added some details Sunday: “He mentioned that 72 people, in total, were injured in the clashes and that Greek authorities had arrested three ethnically Arab suspects. ‘Two of them are from Syria’s Deir Ez-Zor province, named Abu Ayisha and Abu Fatima. However, the third one is a Sunni Arab from Iraq,’ the Kurdish representative said, stating they banded together against the Kurdish refugees and sparked a conflict.” I reported about the incident on Saturday night. 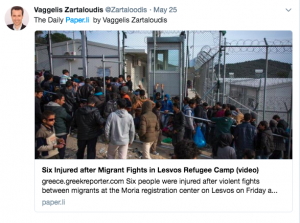 I noticed while reporting it that there were three different narratives being pushed online. One was the Greek narrative, which generally said the cause of the “brawl” was unknown.

There was also the narrative put forward by refugee-supporting activists. This presented the clashes as sensitive and asserted that it was important not to label them “religious.” These twitter accounts preferred “careful” language. They also had specifics but didn’t provide too much context. “The official press agency mentions 6 wounded. Fighting started because some people spoke the dialect of Deir Ez Zor.” One man noted that “Racial profiling was definitely involved.” But what does that mean? Profiling of who by who? MSF also sought to move the discussion from the details of what might have happened to make it about “clashes” and overcrowding. 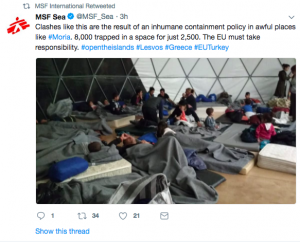 The incident raises many questions. It’s not the first time a refugee was attacked or even killed at a camp. An Afghan man was killed is Greece in 2017. It was also in a “brawl.” Yazidis have alleged that they have been attacked numerous times on the road to seek asylum in Europe. But media prefer to label much of the fighting as “brawls” and not discuss what might be behind it.

Refugees are no different than any other people. But EU states have portrayed them in natural disaster like terms, a “flood” of refugees arriving. The “pour” over the borders. It’s a “tidal wave” of them. Refugees are treated worse than murderers in Europe, who receive nice prison cells. The authorities since 2015 have generally thrown up their hands and done little to ensure humane conditions in the arrival camps or along the way. That has allowed the dehumanization to continue when refugees get in fights. They are portrayed in racist terms, as savage and almost feral. There is little interest in recognizing their difference. Are Afghan refugees Shi’ite or Sunni? Are they members of groups already being persecuted in Pakistan. Are refugees from Syria from regime areas, rebel areas, former ISIS areas, Yazidis or Kurds?

Because the last few years have included a total dehumanization of the people arriving and attempt to portray them as all the same, there is little interest in asking the refugees themselves about their concerns. Woman have expressed concern about sexual assault in the refugee camps, but little has been done for them. What about minorities like Yazidis, should they be housed next to men who might have come from an area run by far-right religious extremists.

Activists tend to claim that making any distinction might stigmatize or stereotype the people. But would it have been normal in 1946 to wonder whether Jewish IDPs fleeing to the West wanted to be housed in an IDP camp with former SS members from Austria who were also “fleeing.” When seen in a European context it seems clear that the victims of Nazism and former Nazi supporters will not want to be in the same camp. There will be tensions between Serbs and Croats for instance, or Poles and Germans. So why not give Kurds and Arabs the same respect? Why not ask the people what they want? The EU has had four years to deal with this and has done almost nothing, except allow the camps like the one at Moria to get worse and worse. Moria camp has been said to be near a breaking point for years. MSF calls it “dangerous.”

Another bias that makes it difficult to get information after events like the attack on Kurds, is that many of the locals do not speak Arabic or Kurdish. They also dismiss Arabic and Kurdish media as “biased.” When I relied on Rudaw and Kurdistan24 one man asked me “only two Kurdish sources,” as if Kurdish sources are unacceptable. Greek sources though, those are acceptable. French? No problem. But why would Kurdish sources be more biased than European sources who have reported so badly on the refugee crises for years? Yes, Kurdish sources speak to Kurdish people and get a Kurdish narrative. But don’t sources in the UK generally speak to local English speaking activists? Don’t they tend to speak to “one of us” on the ground? Why is that necessarily better. Why is relying on one fixer and his several contacts always better than a third country’s media? 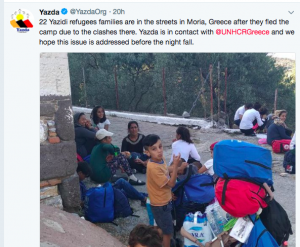 One problem relating to the refugees is a typical western colonial legacy racism that refuses to accept that local people and local journalists have something to say. That means there is less interest in hearing from the refugees themselves, who are seen as “biased.” But foreign aid workers will be trusted “unbiased” sources. Unfortunately the lack of having local speakers of Kurdish dialects, for instance, means it is difficult to identify what is going on. Yazidi groups have warned about attacks on Yazidis fleeing through Lesvos. It’s important to recognize the differences and religious needs of refugees and not just lump them all together. Survivors of genocide, for instance, deserve special attention.

The biggest problem seems to be an issue of denial. Too much reporting on what is going on will raise questions. Why is the crises so badly mismanaged. Where is the funding. Why can’t the EU come to grips with this. The EU has massive resources it plows into salaries for numerous people in its capital, but it doesn’t invest enough in refugees. This isn’t just about not caring about refugees. The EU has done deals with Turkey to keep refugees out. But there’s no reason that those who arrived don’ deserve basic human rights, dignity and protections. It’s not enough to just send riot police to break up a “brawl.” One has to investigate. If a hate crime took place, the media needs to know. Rather than accusing others of spreading “inaccuracies” it would be good to let the victims speak for themselves from hospital without fear of reprisal.

The incident on May 25 raises many questions that are still unanswered.