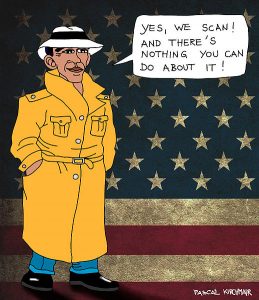 There was so much hope in January 2009 when Barack Obama took office. Here was the first black president of the United States, promising to be a leader for all Americans, to halt the rise of the oceans and to be the most transparent administration ever. Even black Americans were saying the Civil War was finally over.

Unfortunately for America, it didn’t turn out that way. As more and more evidence is revealed daily on the evening news, it is now very clear the Obama administration was the most corrupt presidency in the history of the republic.

As Mr. Obama’s favorite, President Lincoln, warned us, the most dangerous threats can come from domestic enemies.

First of all, that bit about being a leader for all Americans, color-blind if you will, was a tall tale. Mr. Obama never missed an opportunity to sow racial divide. During his term in the Oval Office, racial relations literally went off the cliff. Mr. Obama and first lady Michelle promoted the false narrative that white America was literally guilty of hunting down blacks with glee. They whipped up resentment in minority communities against the police, even though a Harvard study found that blacks are no more likely to be killed by police than whites.

But the racial divisions, as painful and heartbreaking as they are, were not the worst of it.

The abuse of power started to become clear when it was revealed the Internal Revenue Service was biased against conservatives. I still don’t understand why that woman is not in jail. She sat there and lied to the American people and to Congress with no accountability.

Mr. Obama used the agencies, and the awesome power of the federal government, against his political enemies. He used the power of the state against those he didn’t like. This was full-on banana republic dictator kind of stuff.

The negligence at Veterans’ Affairs, the “stimulus bill” that was simply a redistribution to unions (those “shovel ready projects” weren’t so shovel ready after all), the sale of uranium to the Russians, the lies about Benghazi, the Clinton email scandal that was not prosecuted, the appeasement of the Iranians — even sending billions in cash in the middle of the night and bragging about how they lied to the American press and public, the use of financial penalties to fund leftist causes, the use of the Environmental Protection Administration (EPA) to take property from Americans, on, and on, and on. I literally could go on forever.

However, the coup-de-grace is what we are now learning about the 2016 election and the criminal spying on the Trump campaign.

The president of the United States was set up. Mr. Trump is exactly right. The weaponization of our intelligence and security services has damaged their reputation for generations, and the rule of law, to which this great nation is so committed, has been irreparably damaged as well.

I’ve said it before, the Obama administration was nothing more than highly organized crime.

Justice will be served. It may take a while, but the truth will continue to come out.

It’s a shame the administration of the first black president was also the most corrupt. Such a lost opportunity to better this great country.

It’s not that hard to understand. Still, it’s difficult to accept.

The Hi-Tech Traditionalist: Trump Is The Perfect Antidote To Progressive Poison