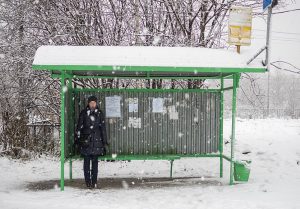 Russia called in the army to help reign in chaos in the capital city of Moscow as the ‘storm of the century’ dumped record amounts of snow, paralyzing the population.

“Russia’s Defense Ministry announced Sunday that 100 engineer brigade troops, two military graders and a tractor had been deployed to clear snow in the city of Krasnogorsk just outside Moscow. “[The weekend’s precipitation] is almost double the indicators that have been recorded in previous years — it’s the strongest snowfall in the past 100 years,” Fobos meteorological center expert Yevgeny Tishkovets was cited as saying by RBC on Sunday. In addition to the troops deployed in the Moscow region, special units in Russia’s Western Military District were put on alert in the neighboring Smolensk, Bryansk, Vladimir and Tula regions, the Defense Ministry announced,” reported The Moscow Times.

At least one person was killed from a falling tree and hundreds of flights were cancelled into Moscow’s three main airports. The public was urged to not use personal vehicles and to use public transportation. Schools were closed.

Muscovites are used to snow and usually are not hampered by the winter precipitation, no matter the amount. However,this storm was different.

The heaviest snowfall of the century hit Moscow over the weekend, with a total of 1.2 mln cubic meters of snow having been removed from the city’s streets in the past 24 hours, Moscow Deputy Mayor Pyotr Biryukov told reporters on Monday. “Such a huge amount of snow fell for the first time in 100 years… So far, roads have been cleared. We definitely have a lot of snow to remove… In the past 24 hours, 1.2 mln cubic meters of snow has been cleared from the city’s streets, the snow clean-up continues,” Biryukov explained. wrote Russian state news agency TASS.

Orban Caves To EU Demands On Soros In Hungary