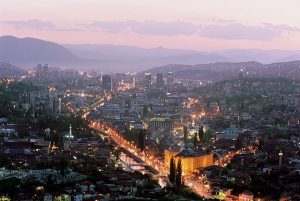 Bosnia-Herzegovina, a country of 3.5 million people, seems to lag behind other Western Balkan countries as far as its progress towards EU membership is concerned. Analysts consider BiH as a less functional state based on self-referential ethno politics. They think the delay is due to its specific composition with two autonomous entities: the Federation of Bosnia and Herzegovina, and the Republica Srpska. There is also a third region, the Brcko District, which is governed locally. BiH has a bicameral legislature and a three-member presidency, including members from each major ethnic group.

It has been 18 years since the EU accession process started. But why the long delay? Let’s have a look at the timeline.

In 2003, alongside other Western Balkan countries, Bosnia- Herzegovina was identified as a potential candidate for EU membership. In 2005, BiH started negotiations for SAA, the Stabilization and Association Agreement. They signed the agreement three years later in 2008. This was also the year in which the visa liberalization process started. In 2010, the Council of EU approved visa-free travel to the EU for BiH citizens. In 2012, EU and BiH started a high level dialogue on the accession process. But it was only in 2015, 10 years after the start of negotiations, that SAA entered in force and the country received the accession questionnaire. In 2016, BiH submitted another application to join the EU and in the same year, the EU Council invited the Commission to present an opinion on the country’s progress. Again there was some optimism in the air…but no more steps followed regarding negotiations.

According to EU officials, Bosnia-Herzegovina has experienced many years in stagnation. Its political situation is destructive and nationalistic. The country’s elite seem not willing to take the process through a successful democratic process. The economic situation is difficult, with an unemployment rate of 27.5%, 62.7% among young people. Although the EU has tried to manage the country’s deep political and structural problems, there has been no progress regarding rule of law and the fight against corruption. There is lack of common vision for the future of all its communities. The country has suffered various internal crises and inconsistent policy, weak business environment, and unsustainable economic growth; there is also a lack of compromise among its leaders, who want to maintain the country paralysis, only to secure and prolong their political survival, based on personal interests. Furthermore, according to various reports, there has been limited progress regarding human rights during 2017. Authorities have failed to end political discrimination against Jews, Roma, and other minorities, and also towards accountability for war crimes in BiH courts. Also 98,000 people remain displaced from their homes, though ethnic conflicts ended more than 20 years ago.

What also counts is the delay in answering the EU Questionnaire, to make it possible for BiH to get candidate country status, showing its amateurism say EU officials. The progress is taking much longer than in other Western Balkan countries. The questionnaire is important to enable the EU to understand the progress of BiH institutions and legislation for EU standards.

Commissioner Johannes Hahn stated last December that the only way to move forward in the EU integration process is to achieve concrete results on reforms.

2018 is the election year for Bosnia-Herzegovina, in October. It is foreseen to be very much politicized that will further slow down the EU integration process.

In recent days info in the media showed the enlargement strategy for the Western Balkans, that includes Albania, Macedonia, Kosovo and Bosnia-Herzegivina, will be published during February and foreseen to be accomplished by 2025. According to analysts, among the main reasons for such postponing and delays are: Euroscepticism, rising nationalism, Balkan authoritarian leaders, and the efforts of Russia and Turkey to enforce their influence in the region.

The Hi-Tech Traditionalist: Why Do (Most) American Jews Hate Israel – When The Pupil Becomes The Master