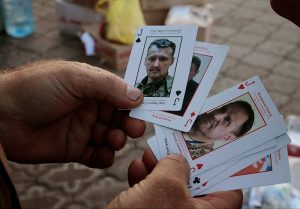 The sound of canon fire has become more distant of late in Krasnohorivka. But the war continues to haunt Lioudmila Sidonnka. The young mother’s stories are those of soldiers running in all directions, of smoking tanks, never-ending detonations, nights spent in her building’s basement, houses on fire.

Little wonder that so many residents in this hamlet, on the Ukrainian side of the frontline, have left. After three years of conflict, only about 100 people — a third of the ghost village’s pre-war population — remain. Lioudmila and her family are among the holdouts. Her 14-year-old son, Vadim, shows us shell fragments that he’s collected. He also shows us around his school, the only connection he still has to real life. Life before the war…

Russians Deal With Notre Dame Tragedy With Horror, Kindness, And “I Told You So”