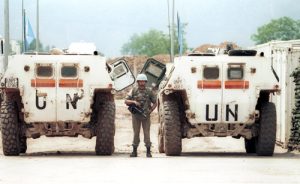 Russia and American envoys to Ukraine will meet in Belgrade on November 13th to try and come to an agreement regarding the deployment of United Nations peacekeeping forces to East Ukraine, to dampen the conflict which still rages since 2014. Kurt Volker of the U.S. and Russia’s Vladislav Surkov agreed to a ‘discussion of principles,’ although Volker told reporters on Friday, “We are not in agreement on this yet.”

Russia submitted a U.N. resolution in early September which called for U.N. protection for the Organization for Security and Cooperation in Europe (OSCE) members in Donbass, reported Bloomberg. One of these individuals was killed by a car bomb earlier in the year in rebel-held territory. The U.S. rejected the Russian-backed measure, calling for deployment of U.N. forces across the conflict zone which would include the border with Russia where Kyiv says material and troops cross frequently,

There is an effort on both sides to see that heavy weapons are actually pulled back, a process that started with the original Minsk agreements in 2015.

Kyiv accuses Russia of being heavily involved in its internal affairs throughout the rest of the country, fomenting unrest and instability. There have been multiple car bombings, and other assassinations recently in the Ukrainian capital.

However, on a recent trip to Kyiv, Tsarizm noted a strain in the local rhetoric which believes the Ukrainian government also benefits from the conflict in Donbass, as it keeps the public’s focus off of the rampant corruption in the national government. “The government benefits from the war,” one knowledgeable source told Tsarizm.