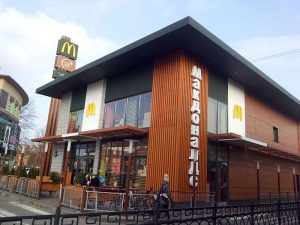 State Duma Deputy Boris Chernyshov, a member of the Liberal Democratic Party (LDPR) said the same label should apply to McDonald’s, KFC and other American fast food restaurant chains operating in Russia. Chernyshov told the RBC business portal on Friday that he had sent a letter to Russia’s food and media watchdog proposing that ads for the fast food chains be marked as belonging to a foreign agent. The next step, he suggested, would be to include fast food chains in the foreign agent registry, reported The Moscow Times.

“Research has shown that food sold by American fast-food restaurants is damaging to people’s health,” Chernyshov said. “But ads show only the positive side of consuming these products.”

Fast food in the Russian Federation is very popular due to the cheap and fast nature of the product but many Russian officials, and those in the Moscow aristocracy, accuse these chains of ruining Russian cuisine and endangering the health of the public in the long-term.

Western sanctions against Russia due to Moscow’s annexation of Crimea, and the war in Donbass in East Ukraine, have forced the country to develop domestic versions of previously imported goods from the West. Fast food could eventually fall into this category if foreign chains are banned, with copy-cat versions of the business springing up.

The Trump administration has been unable to fulfill an election promise to improve relations with Moscow due to the political climate in the United States. Many analysts believe diplomatic ties between American and the Russian Federation are at the lowest level in decades.