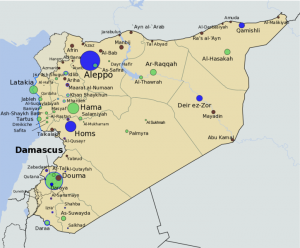 Israeli Prime Minister Benjamin Netanyahu, having been forced to get closer to Moscow after the Obama administration’s support for the Mullahs in Tehran against the Jewish State, declared that he stays in contact with both capitals now to maintain Israel’s security in the Levant.

“I am in continual contact with the White House and the Kremlin on this matter. The Defense Minister and the Chief-of-Staff are in similar contact with their counterparts in both the US and Russia,” Netanyahu said according to his office.

“Regarding southern Syria, we will continue to defend our borders. We will extend humanitarian assistance to the extent of our abilities. We will not allow entry into our territory and we will demand that the 1974 Separation of Forces Agreement with the Syrian army be strictly upheld,” the statement said, reported Russian state news agency TASS.

Russia obviously is exploiting this closeness with a long-standing American ally; this is the result of the Obama administration’s abandonment of traditional American allies, choosing instead to cozy up to a murderous regime seeking hegemony in the Middle East. The reasons behind the Obama agenda in Iran will become clear over time as the truth gets out.

Video: In Russia, You Don’t Need A Hook, All You Need Is A Bucket