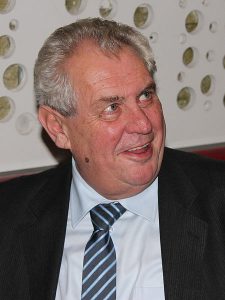 The leader of the Czech Republic, President Milos Zeman, known for his closeness to the Kremlin, said this week that the annexation of the Crimean peninsula by the Russian Federation is a ‘done deal’ and any attempts to get it back could start another pan-European war.

“Nikita Khrushchev made an unpardonable stupid thing, and many politicians acknowledge today that Crimea cannot be returned to Ukraine,” Zeman said.

Zeman cited former German President Joachim Gauck as saying: “If we want to take Crimea and return it to Ukraine, this would mean a European war.” According to Zeman, this is impossible. “We should avoid a European war, and you should understand this,” he said, reported Russian state news agency TASS.

“Crimea is already an accomplished fact,” the Czech leader said, adding that Russia could pay compensation to Ukraine “in financial form or in oil and gas.”

Zeman has been accused of an uncomfortably sympathetic relationship to Russian interests. The Kremlin has worked tirelessly to divide the West and support leaders that may bring former satellites back into the Russian orbit. The Czech Republic is definitely one of those targets.