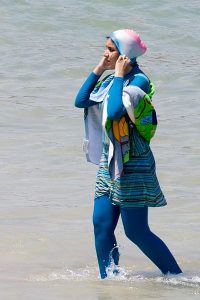 The president of the Czech Republic, Milos Zeman, known for his harsh views on Islamic migrants, recently defended some pools in the country banning the Burkini, the Islamic modesty dress for women. The president said the dress was not hygienic and had no place in the country.

“In Czech swimming pools there is no reason for anyone bathing in Arab clothes,” Zeman said. The Czech leader did make allowances for women to cover up depending on their body type.

“From the point of view of basic hygiene, you never know what kind of mess these fabrics might contain,” Zeman added, reported Breitbart.

“I do not think there is a reason why someone in a Czech swimming pool would have been bathing in Arabic clothes. By the way, if the Czechs arrived in an Arabian pool, they would be very bad to be in their bikinis.”

Ukrainian Helmet Cam During Mop Up Operations In Maryinka

No, The Bolsheviks Were Not Critical To Russia’s Existence