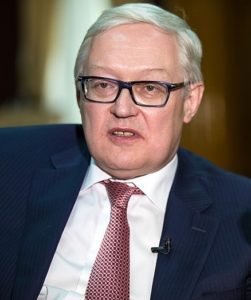 Russia’s adversaries in the U.S. Congress are preparing an “economic blockade” against Russia, by pushing a bill that would prevent President Trump from easing sanctions against Russia, Deputy Foreign Minister Sergei Ryabkov said in a statement Tuesday.

“They are going out of their way to trample out any hope of improving our relations,” said Ryabkov. He was referring to legislation which would impose Congressional oversight on President Trump possibly lifting sanctions on Russia.

“We can’t exclude the possibility that this bill will actually go forward, given the severity of the anti-Russian sentiment on the Capitol Hill.”

Ryabkov said the Russian Foreign Ministry will avoid “over-dramatizing the situation,” and allow the Trump administration to make clear to the world what their policy on Russia will be.

“But we are carefully documenting all the signals coming out of Washington,” Ryabkov finalized, reports The Moscow Times.