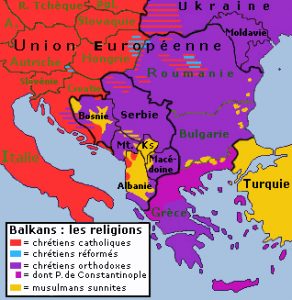 On April 18, during an interview for a European media outlet, Albanian Prime Minister, Edi Rama, stated that, if Europe’s doors were closed for the Western Balkans, smaller unions would appear, such as the unification of Albania with Kosovo. This statement triggered numerous reactions.

“The only way to keep the Balkans in peaceful and cooperative spirit … is to keep the EU path open … No one would want to turn to himself, by seeking smaller unions; we would all like to join the big one. But if there is no hope, perspective and space, then of course, smaller unions could take place,” Rama said.

On April 19, Rama’s statement was followed by the President of Kosovo, Hashim Thaci, who expressed his anger over what he called “lack of EU vision for the region.”

“Since 2013, I have stressed and I still repeat that, if the EU closes doors for Kosovo, all Albanians in the region will live under the same country, to later integrate into the European family,” Thaci mentioned.

After these statements there was a reaction from the US ambassador in Tirana, Donald Lu, who told BIRN that “The US government supports the sovereignty of Kosovo and Albania. We are against any careless discussion about joint states. It hampers the stability of the region and the European path for both countries.”

These statements have really disturbed Serbia, which continues to claim that Kosovo is part of its territory, even though its former province declared independence nine years ago.

Serbian Prime Minister, Aleksander Vucic, has called on Albanian politicians not to make such statements public. “We ask, I repeat, we urge that such statements should not be released to the public, because they do not contribute to good relations in the region or to the creation of an atmosphere of cooperation and joint work on important projects”, Vucic maintained, during Serbian government’s press conference few days ago.

However, the statements of Rama and Thaci did not have any specific echo in the Albanian press, perhaps due to the fact that Albanians on both sides see such a union as natural. But it continues to cause alarm with the Serbs.

On April 25, the Commissioner for Enlargement, Johannes Hahn, has reacted fiercely to such statements. “I express my frustration and boredom regarding the encouraging statements made by some leaders in the region. Such statements can be considered as interference in the affairs of neighboring countries and in the changing of borders, and are unacceptable, unnecessary and inefficient”, Hahn said.

Criticism was also addressed to Kosovo President, Hashim Thaci, who was in line with Rama. Commissioner Hahn went even further, when asked by journalists, whether it was a maneuver of Albania and Kosovo to put pressure on the European Union. “If someone thinks such statements can put us under pressure, it would be a big mistake, because it hurts the message core. The European Union has strong interests to have peace, stability and prosperity in the region and these can only be achieved through good neighboring relations and when we all work together and contribute to the development of the region”, Hahn stressed after a meeting with Serbian Foreign Minister, Ivica Dacic.

The Balkans, however, remain a sleepy volcano that seems to be reactivated, as soon as one of its leaders crosses a diplomatic border; which means that, in reality, there exists an imposed peace and tranquility in the region.