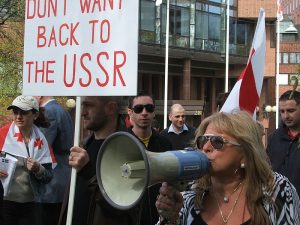 BENEATH the wooden balconies of Tbilisi’s charming Old Town, the faux-medieval signs offering wine tasting are as likely to be in Russian as in Georgian or English. Even some of the graffiti is in Cyrillic script. After the Russia-Georgia war in 2008 (pictured), Russian tourists stayed away, so visitors tended to be addressed in English. But now they are back, and so is their language.

A new generation of Georgian political leaders is equally pragmatic when dealing with Russia itself. The two countries still have no diplomatic relations. But their officials hold regular bilateral talks. And practical initiatives are easing trade, travel and transport between the two. “This government is bending over backwards not to antagonise Russia,” says Ojars Kalnins, a Latvian politician and diplomat…

To read more visit The Economist