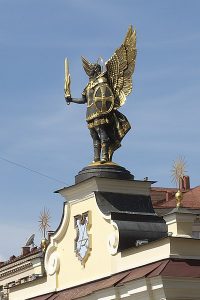 Over two thousand supporters of Saakashvili clashed with police in the same spot where over one hundred protestors were murdered by snipers during the Maidan revolution in 2014 under the Yanukovych regime. Saakashvili also demanded corrupt oligarchs be removed from positions of influence including Rinat Akhmetov, who he called “the enemy of Ukraine”, reported Bloomberg.

“I’m suggesting Poroshenko or his representatives have a meeting on camera to discuss just one issue: how they will give back money, stop corruption schemes, bring their allies to justice and go away,” Saakasvhili said to his supporters, wrote Bloomberg.

He suggested they use Zhovtnevy Palace, in the city’s downtown, as a base for the protest. Supporters later clashed with police trying to break through a security perimeter around the building. They got into the building’s hall but were then stopped from going further by police using fire extinguishers, news service Ukrayinska Pravda reported.

Saakashvili gained fame by reducing corruption in his native country of Georgia after the fall of the Soviet Union. He resigned as mayor of Odessa in 2016, and began opposing President Poroshenko, saying the president was enabling corruption to flourish. Saakashvili lost his citizenship but has continued to call for Proshenko’s impeachment.