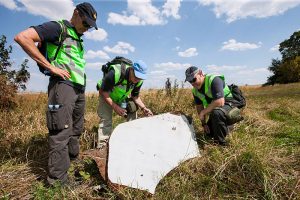 An international investigative group has labeled a senior Russian general as a ‘person of interest’ in the downing of Malaysian flight MH17 over East Ukraine by pro-Russian separatists. MH17 was shot down over the conflict zone in Ukraine’s Donetsk region on July 17, 2014, killing all 298 people on board. Analysts allege a sophisticated anti-aircraft, mobile weapon system called ‘BUK’ destroyed the jetliner in mid-flight after being brought from Russia inside the Donbass territory and then sent back after the incident. The BUK is a modern derivative of the SA-6 which terrorized American pilots over North Vietnam.

“The Bellingcat investigative group — which uses sophisticated digital techniques to analyze open-source audio and visual data — issued a report on December 8 alleging that a man identified on intercepted communications as “Delfin” (Dolphin) is retired Russian Colonel General Nikolai Tkachyov, who is currently serving as the chief inspector of Russia’s Central Military District. The Dutch-led Joint Investigative Team (JIT), which investigated the downing of Malaysia Airlines flight MH17 over eastern Ukraine and issued its findings in September 2016, previously published audio files of five intercepted communications between individuals identified by the pseudonyms Delfin and Orion,” reports RFERL.

Russian state news agency TASS released this comment from the individual in question after the report was issued, “I don’t know what it is they are saying but it is obvious stupidity,” he told TASS commenting on an article about a joint investigation carried out by The Insider and Bellingcat. “I have been living in Yekaterinburg for many years, participating in military and patriotic education programs for kids. I have been maintaining contacts with public organizations and taking part in various public events, always on the media’s radar. I have nothing to add.”

Russia accuses the Ukrainian military of downing the aircraft, going so far as to say the jet was downed by an air-to-air missile.

“The investigation into the crash is being conducted by the Joint Investigation Team (JIT), comprising representatives of Australia, Belgium, Malaysia, the Netherlands and Ukraine. Earlier on Friday, the Dutch prosecutor general’s office said that the JIT would thoroughly assess the information published by Bellingcat,” writes TASS.