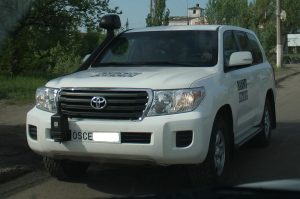 Alexander Hug, principal deputy chief monitor for the Organisation for Security and Co-operation in Europe’s mission in Ukraine, declared in a recent interview a serious increase in the number of ceasefire violations in the Donbass region of East Ukraine, where a war with pro-Russian separatists has been smoldering since 2015 when the Minsk peace agreements were signed by world powers. The European security organization called on both sides to withdraw heavy weapons from the front lines after a child was killed by artillery.

“The OSCE’s 503 monitors in the region are now seeing a weekly average of 220 incidents involving heavy weapons, up from around 40 a week after a harvest ceasefire, with a total of 3,877 such weapons spotted this year in violation of the ceasefire,” reported Reuters.

“The warning signals of this uptick have been out there,” Hug said. “We have been warning through our reporting that the situation is gradually deteriorating again.”

“If some of these military technical issues are not tackled now … we may see an increase in violence toward the end of this year,” said Hug, wrote Reuters.

“All along the 500-km contact line where the fighting takes place, they are standing basically next to each other, and that is of course a recipe for more of the same.”

“Returning fire is also a violation of the agreements. There is no exception to the non-use of weapons.”