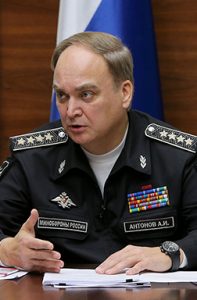 Russian Deputy Foreign Minister Anatoly Antonov was appointed by Russian President Vladimir Putin to be the new Russian ambassador to the United States, to replace Sergei Kislyac. Kislyac had been highlighted by the American mainstream press for ‘meeting’ American diplomats during the alleged ‘Russian hacking’ of the American election pushed by the DNC and their media cohorts.

Antonov is blacklisted by the West for his involvement in the Ukrainian conflict in Donbass and the Russian annexation of Crimea. Antonov was deputy defense minister as the East Ukraine war unfolded.

Antonov’s forceful advocacy of Kremlin policy at the Defense Ministry earned him a reputation as a hawk. In 2015, he blamed “Western spin masters” for the Ukrainian crisis, which he said was “aimed directly against the interests of Russia.” He also said that Asian countries were targets of “undisguised U.S. pressure” as part of efforts at “systematic ‘containment’ of Russia and China,” reported The Washington Post.

Antonov will take over the ambassador post on Sept 1, 2017.

Anatoly Anotonov, born in 1955, graduated from Moscow State Institute of International Relations in 1978. In 2004-2011, he headed the Russian Foreign Ministry’s Security and Disarmament Department, while in 2011-2016, Antonov served as deputy defense minister. In December 2016, he was appointed deputy foreign minister, reported Russian state news agency TASS.