We are now in the year 1942. Well, not really, but in terms of the impeding collapse of the third attempt of German domination over Europe we might as well be. Germany embarked on the two previous attempts, first in 1914 and then in 1939 under two different ideologies; that of the German Empire (a cut-and-paste from the British Empire) and that of the Arian Nation (Third Reich), an original idea astounding in its idiocy, shortsightedness, and brutality. History tells us that the last attempt came to an end when the Soviet Red Army blew up the Reichstag in Berlin on May 9th, 1945. However, the seeds of the collapse were sown two years earlier, in January of 1943, when the Red Army surrounded Wehrmacht’s Sixth Army at Stalingrad and forced its complete surrender together with Generalfeldmarschall Friedrich Paulus, who thought twice about Hitler’s orders to commit suicide. 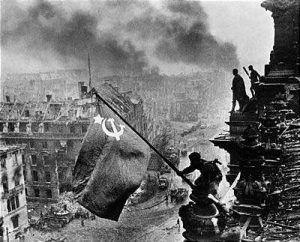 For the past several decades we have been witnessing the third attempt at German domination, this time under the banner of globalism and the European Union led by the twin spawn of the Third Reich, Angela Merkel and George Soros. Surprisingly or not, this last German folly is proceeding along the same lines as the first two, albeit on a drawn out time scale and thankfully with significantly fewer (but not zero) casualties. Now like then, the first domino to fall was France, which just as before surrendered without firing a shot by entering the EU under German leadership. Similarly, England was as reluctant to join the German project as it was to actively resist it. Finally, just like in the early years of both world wars, Germany won a decisive victory over Russia by dismantling, in 1990, the USSR and its military alliance the Warsaw Pact. As a way of a successful innovation, Germany succeeded in achieving this amazing victory by harnessing the blood and the treasure of its erstwhile adversary, the United States of America.

The 21st century began, for Germany, in a highly auspicious manner. The main lesson from the two previous attempts, i.e. keep the US on your side at all costs was learned and successfully implemented. Russia was in free fall, politically, economically, and militarily. Globalist ideas were accepted as gospel truth on both sides of the Atlantic. Britain was isolated its silly insistence on keeping its own currency shaken by Soros’s brutal speculative attack on the Pound Sterling. In America, globalists set about shedding manufacturing capacity in automotive and other areas opening the door for ever increasing German exports. The globalists’ final coup de grace to the old world order, the one created in New Hampshire’s Bretton Woods in the final year of the Third Reich, was proceeding as planned.

Using the US as their proxy, the globalist elites entered into a massive destabilization campaign in the Middle East, resulting as planned in massive waves of young, male, and angry Muslim migrants into the heart of Europe rendered borderless by the Schengen Agreement. The resulting reign of terror in major European cities was not a side effect; it was precisely the desired effect of the Merkel – Soros open borders policy. The lost sense of personal safety and the measures that local authorities had to take to at least pretend to fight Islamic terror directly led to the loss of personal rights such as the rights to privacy and free expression and paved the way for Europeans to get used to massive military presence in their streets, shopping malls, beaches, and cultural landmarks. For the first time since the last time Germany was the main culprit in European upheavals, fully armed army detachments were seen in Paris, London, and Rome.

However, just like in the past, glorious blitzkrieg victories are followed by a quagmire with clear signs of reversal of fortune for the globalist cause in general and Germany in particular. Just like then, European countries led by Britain and Russia are refusing to submit to German domination. Just like then, better late than never, America is shedding its indifference, refusing to trade its national identity for cheap consumerism, and finally coming to the rescue. Just like in faded photographs from the Yalta Conference with the two old Lions of the West, Churchill and Roosevelt flanking the wily fox Stalin, so today, an uneasy, troubled, ad-hoc, but yes, an alliance is forming under the leadership of President Trump between the US, post-Brexit Great Britain, and Putin’s Russian Federation. Just like then, the members of this alliance know that once its job is done, once Germany with its dominance-obsessed globalist ideology is once again brought to her knees, they must part ways and perhaps become, once again, bitter enemies. But for now, there is one more decisive battle to be fought and won. 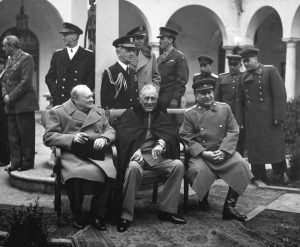 So where will it be, this new Stalingrad? The answer lies on the banks of the Dnieper River in the first city of Russian (yes, Russian, not Ukrainian) Christendom, Kiev. A stable, nationalistic, de-globalized Europe cannot contain within itself an independent polity called Ukraine. The few brief moments in which Ukraine was even quasi-independent and not a fully integral part of Russia were moments of extreme instability on the European continent and the same is true today. Independent Ukraine has a pronounced penchant for ugly extremist nationalism with a nasty anti-Semitic streak. It is also prone to extreme corruption and kleptomania by its leaders. All of this is happening today, at an alarmingly accelerating rate. The richest and best managed of all fifteen Soviet republics on the day of independence in 1990, Ukraine is now dead last among all of them in every possible metric. Ukrainian industry and agriculture are in a state of near total collapse. In stark contrast to the putative ideology of its globalist masters in Berlin, Ukraine is engaged in a brutal campaign of inventing its own indigenous culture, often from whole cloth, and suppressing all other cultures and languages, specifically the Russian, which just happens to be the native tongue of most Ukrainian residents. Odious figures from Ukraine’s WWII past such as Stepan Bandera who was an open Nazi collaborator are resurrected as positive symbols of Ukrainian nationhood. The main achievement of the new pro-Western government, the visa-less travel regime with the EU is threatening to turn the Ukrainian population into a source of near-slave labor for wealthier European countries; a nation of dishwashers, chambermaids and sex-workers toiling away in the underbellies of Western European metropolises.

Ukraine is not Estonia; it is a large country with nearly the surface area of France and over forty million inhabitants. It occupies some of the most strategic real estate in Southcentral Europe and has a large if outdated and ill-trained military. Unlike countries like Poland or Hungary, Ukraine has no experience in self-governance and is not, in the true sense of the word, a European nation. The slow, but accelerating and inevitable collapse of Ukraine into lawlessness will place an unsustainable strain on the EU. Russia has already said that it would welcome all Ukrainian refugees and grant them, on the spot, Russian citizenship. Many ethnic Russians residing in the eastern parts of the country will choose that option. But most will flee westward. The ex-Soviet republics and satellites directly bordering the Ukraine to the west have many problems of their own and will not admit Ukrainian refugees. The resulting humanitarian disaster will exceed anything seen since the 1940’s.

It is thus imperative that Russia is allowed to win the battle of Kiev and save the world from Germany and from globalism, just as it won the Battle of Stalingrad to defeat fascism seventy-four years ago. A coalition of bordering nations such as Poland and Romania led by the US with participation from Great Britain (but not the EU) needs to supervise a free referendum on the future of the Ukraine, followed by free elections both in the Ukraine and in the ethically Russian regions of Donbass and Luhansk. Crimean peninsula needs to be internationally recognized as integral part of the Russian Federation and following its example any Ukrainian provinces or regions that wish to rejoin Russia should be allowed to do so. The remaining areas of the Ukraine must be declared forever unaligned, with no possibility of joining the EU, NATO, or any other international alliance.

Once the Battle of Kiev is fought and won a death blow will have been dealt to the third iteration of German attempt at European dominance and to the globalist movement as a whole. Good riddance and God speed.