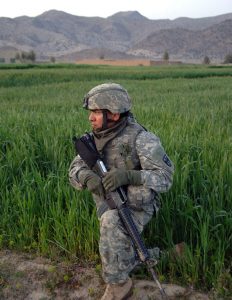 The Kremlin and the Trump White House continue to negotiate and trade barbs through the media, where each is trying to spin the narrative in its favor, as only two major players in the great game can do. Today Russia declared the new Trump Afghanistan policy as actually aimed against China, rather than the Taliban or Russia, in an attempt it seems to rile Beijing into more action in Central Asia.

“New scenarios of the US strategy in Afghanistan affect the interests of China. Over the recent time, the administration of [President Donald] Trump has been way too active in initiating hotbeds of tension close to the Chinese borders: in North Korea, and now in Afghanistan,” said Adzhar Kurtov, who is also editor-in-chief of the Problemy Natsionalnoy Strategii (National Strategy Issues) magazine, reported Russian state news agency TASS.

“Behind all these bright-eyed statements about a certain new strategy in Afghanistan is a trivial position – to remove a rival or weaken him. Nowadays, the People’s Republic of China is the main rival of the US on the global arena…China is active both in the Silk Road Economic Belt project and in the Shanghai Cooperation Organization.”

“From the details of the plan that have been voiced, we know that he is planning to beef up the military contingent with 4,000 military…However, if the US has failed to have the situation in Afghanistan change for the better with its 1,000-strong contingent, who can say for certain that new volunteers will help the process? I believe the US must withdraw from Afghanistan,” said Kurtov.

One thing is for sure, the Kremlin is correct that American policy in Afghanistan to date has failed. We’ve been there long enough. Why does the Pentagon think 4,000 more troops will turn the tide? What happened to the new and innovative thinking we were promised in the campaign?

Putin Says He Respects Trump, Calls Him Extraordinary Individual Not From The Establishment, Calls Biden A ‘Career Man’