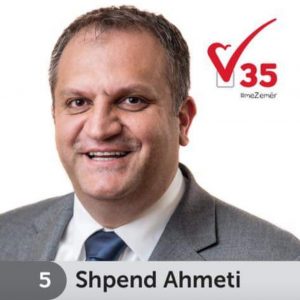 Shpend Ahmeti has been one of the most distinguished figures of the “Vetvendosje” (Self – determination) movement, Kosovo’s most determined opposition force.

He won his second mandate as Mayor of Pristina last year; however, since then he has been objecting to some of his group’s moves and attitudes, mirroring serious internal contradictions within the party.

Time and again, there have been disagreements with other members of “Vetvendosje”, mainly with its historic leader, Albin Kurti. This has brought about the resignation of other dissatisfied party members in the past months.

“Vetvendosje” has a 12-year history in Kosovo’s political sphere and has always been in the forefront of opposing most governmental decisions. It started as a street movement involving mainly young people, but quickly become a strong political opposition force. “Vetvendosje” MPs are known for their confrontational tactics in Kosovo’s parliament, using even violent ways.

Last year, “Vetvendosje” faced its biggest challenge when disagreements started due to some text messages of its MPs that were made public by a newspaper, which reflected insults and attacks against the “Vetvendosje” leadership, mainly its founder, Albin Kurti. The interpersonal clashes caused some important members to resign with the passing of time. Two opposing groups are established within the party, although there have been efforts to find a solution not to split. Now it seems a final agreement could not be made.

Ahmeti’s resignation from the party and his position as Pristina Mayor is criticized by the majority, as he was elected by Pristina citizens, who do not deserve to be let down.

There is some speculation that the “Vetvendosje” MP group that resigned might form a new political movement.

United States Call For Termination Of UN Mission in Kosovo