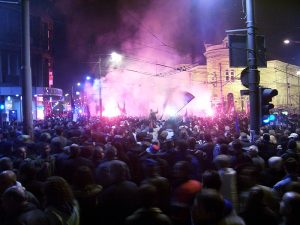 The death of Oliver Ivanovic, the Kosovo Serb leader, came after a recent warning from the Kosovo Institute for International Studies, where according to IKSN, state security in Serbia has established a special unit called ‘The Wolves’, which will carry out a secret operational plan to organize violent activities (interethnic riots) in Kosovo. In an interview yesterday on TV Klan Kosova, the executive director of this institute Abedin Selimaj said, “Actually killings such as that of Oliver Ivanovic in Kosovo have happened before the war, after the war, and during the orchestrated war by the Serbian state itself “; however, he reserves the latest suppositions to investigating the true perpetrators of Ivanovic’s assassination. In the same interview, the director of security of this institution, Mr. Bedri Elezi, said that their report on riots expected to be organized in Kosovo, orchestrated by the Serbian secret service, has been submitted by the institute to the government on 10 January 2018. The report according to Mr. Elezi, contains detailed information that has not been presented by this institute in the press release distributed yesterday to the media.

The report states that the unit called ‘The Wolves’ was established specifically for this secret operational plan and in this organization were selected Serbian elite officials from the military intelligence service as well as the police. This operational plan is called ‘The Holy Land’ and will be led by senior official Zoran Strakovic, pseudonym Zoki, who is from Zaskok village – Ferizaj / Uroševac municipality, who before and during the war was a senior Serb state security officer until the retreat of Serbian forces from Kosovo. Strakovic currently lives in Belgrade. According to IKSN, this unit has its main base in Nis of Serbia, but operates throughout the territory of Kosovo, where it is suspected that there are 8 other centers. This unit has engaged in total 22 agents at the base of Nis as well as eight other agents operating in the republic of Kosovo. Sources indicate these eight centers have a total of 154 associates who are Serbs and non-Serbs, but who operate throughout the territory of Kosovo.

US Pressures Serbia To Break Links With Russia

These sources also say about 20m euros are provided for this operational plan. According to the information available to IKSN, it is suspected that these persons have the duty to organize violent activities against Serb minorities in enclaves or other facilities where currently are active citizens of the Serbian community. It is suspected that these violent activities will be done in order to change the security situation and thus the lives of Serbs living and operating in Kosovo will be endangered. From that created situation, the Serbian government will call for the interruption of the dialogue with Kosovo and seek from international entities the reorganization of the functionalization of institutions belonging to the Serbs. These sources are informed that the Serbian government will come up with some demands on the international community and the government of Kosovo in order to create conditions for continuing the dialogue, such as creating a parliamentary chamber for the Serb community, establishing a Serbian police directorate, battalions of the Serb community within the Special Forces of Kosovo, the creation of a special unit of Serbian police officers as part of the Kosovo Police and KFOR for securing Serbian heritage as monasteries and churches and a host of other demands.