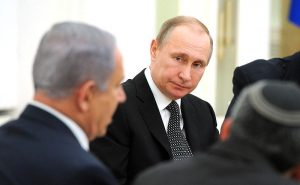 Israeli Prime Minister Benjamin Netanyahu will travel to Sochi, Russia to meet Russian President Vladimir Putin on the 23rd of August. The Russian government has not yet confirmed the meeting.

Netanyahu (Bibi) recognized early in the Syrian conflict that deconfliction with Russia was critical to Israel’s security, especially in light of the Obama administration’s support for Iran, the real Islamic state that has repeatedly described its desire to destroy the Jewish State.

Putin has met with Bibi multiple times in Russia as the Kremlin would like nothing better than to get closer to Israel, to peel away an important, historical American ally.