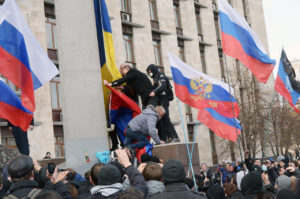 The leader of the Crimean Tatar people, the deputy of the Verkhovna Rada of Ukraine, Mustafa Dzhemilev, ruled out the possibility of returning Crimea by military means, as it would entail ethnic cleansing and would make the peninsula uninhabited.

“…Another way is military intervention, which now seems hopeless. This would entail ethnic cleansing. And if there is too much military action, Crimea will become a desert peninsula, useless to live..”, – Said Dzhemilev on the TV channel “112 Ukraine”.

For some reason, more and more deputies of Verkhovna Rada have ruled out the necessity of military intervention in the Crimean conflict. Early in January Nadia Savchenko, Ukraine’s MP and former Air Force pilot, caused controversy with the suggestion that Ukraine should give up the Crimea in exchange for Russia leaving the Donbass region. She, just like Mustafa Dzhemilev, stressed that the situation in the east of Ukraine can only be resolved peacefully.