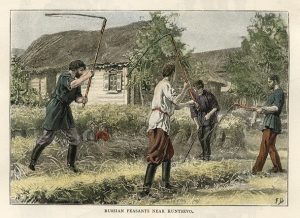 Posttraumatic stress disorder (PTSD) is a mental disorder that can develop after a person is exposed to a traumatic event, such as sexual assault, warfare, traffic collisions, or other threats on a person’s life. Symptoms may include disturbing thoughts, feelings, or dreams related to the events, mental or physical distress to trauma-related cues, attempts to avoid trauma-related cues, alterations in how a person thinks and feels, and an increase in the fight-or-flight response. These symptoms last for more than a month after the event. A person with PTSD is at a higher risk for suicide and intentional self-harm. (Wikipedia).

Imagine that you were born into a Russian peasant family in the year 1900, maybe in the Kolomna region just southwest of Moscow, an area of great natural beauty, verdant meadows, quiet rivers, and rolling pastures. Your ancestors had lived on this land since time immemorial. They sowed in the spring and harvested in the fall, and in the winter the family hibernated on the huge brick and clay woodstove that occupied the better part of the small log izba (hut) with its tiny windows and thatched roof. The red (another translation: beautiful) corner of the hut once housed ancient Slav idols, but the Mother Goddess of fertility with her sagging breasts and large hips had long since been replaced by the Virgin Mary looking soulfully down on her Child. Christ the Savior was also there, of course, but now just like in millennia past, it was to the merciful Mary that both mother and father prayed to when things got tough. 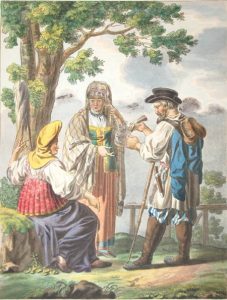 On Easter and Christmas your whole village made the pilgrimage to the barin’s (nobleman’s) mansion up on the hill to kneel while the priest delivered his blessing and receive a piece of candy from the hand of the Mistress herself. The Prince was always there, as old as the hills and the tree spirits. Many centuries ago new princes showed up from the North with better swords made of shining hard steel, but even they could not fight back the fierce mounted archers with the dark slanted eyes. Both the Vikings and the Mongols were all swallowed in good time by the vastness that was Russia, only leaving behind a few strange-sounding but now familiar words, a few dark haired, high-cheekboned boys and girls, a silly family tree in the Lord’s dining hall that your uncle had seen when he was serving in the manor.

For many centuries life flowed with the seasons; Holy Mother Russia, with our batyushka (literally: little father, as in a term of endearment) the Czar and the Holy Pravoslav (Greek Orthodox) Church at the helm, could never lose. Sure, she was sometimes sorely tested, by the Golden Horde from the East and many seasons later by the short Corsican from the West, but she had always prevailed, and always would. Over the long winter nights, huddled on the woodstove, you heard, for the countless time, the story of your ancestor Vas’ka, who in 1812 fought with His Highest Honor, the Brightest, General-en-Chef Kutuzov and followed him all the way to the French capital of Paris from which he brought back a full set of French cuirassier’s armor that would still be displayed in the red corner had your good for nothing grandfather not drunk it away when the serfs were freed forty years ago. 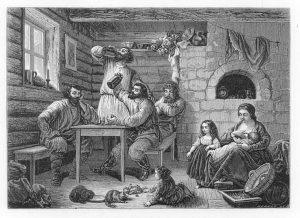 But then, when you were still a young boy strange men showed up in the village. They tried to dress like your folks and talk like them, they even had long scraggly beards, but they used strange words and some of them had strange throaty R’s (Jews had a different R sound than Russians, deriving from their native Yiddish). They got the grownups to assemble in the village square and said that the Prince and his family had gold and expensive wines in his cellar and it was all paid for by the blood they and their ancestors had sucked from the villagers. They told stories of what the barin’s family did when they spent the long winters away in Saint Petersburgh, how they had a great house and gave balls where their women danced half-naked with strange men and how it was all paid for by the wheat and barley that they carted away from the village in the fall. The grownups listened, eyes downcast. None of this was new, of course. The footmen, the chambermaids, the lackeys, they were all peasant stock, they were all from the same village and villagers gossip no worse than any townfolk. But coming from the lips of the strangers, things that were par for the course suddenly sounded wrong, obscene, even. Why did the prince’s family live in idle luxury from the fruit of their toil? Why did they have to work five days on the lord’s fields and only one on their own private patch? And when the serfs were freed, why did they have their ancestral lands leased to them against a rent they had to pay in perpetuity to the barin? Why weren’t they given the land free and clear, after all wasn’t it their own ancestors who had worked it since time immemorial? And the priest? Why did he have his own hut and his own stipend, all paid by the village without doing a day’s work in his life? Yes, he taught them the letters and the Bible, but he also taught them to obey the barin because that’s what Jesus wanted, but wasn’t Jesus really a poor man like themselves? Wouldn’t Jesus be on their side?

On your 18th birthday these words would ring in your ears as you saw the barin’s young family, his beautiful wife, his two daughters, the old estate caretaker carted away as the old manor house brightly burned in the late August sun. You were not a child anymore – no you and your Nagant revolver had seen many things that no one had any right seeing on this earth. You slashed and burned your way from the Carpathian Mountains to the White Sea, but when your tendon was cut just below the knee by a White officer’s sabre you knew it was time to come home. The land was yours now and you knew just what to do with it.

On your thirtieth birthday, you were a happy man. The hut was much bigger now and the old woodstove freshly whitewashed. You could house the pigs and the hens outside in the new barn for a change and your wife and sons were all good workers, and smart too. Sometimes the faces of those you had to shoot point blank, the young cadets often only fourteen years old fresh form the cadet academy in Saint Petersburgh, often in their dress whites just as they ran out from class, you could still see the white peach fuzz on their upper lips through the iron sights on your long Moisin-Nagant rifle when the dreaded word “fire” came. 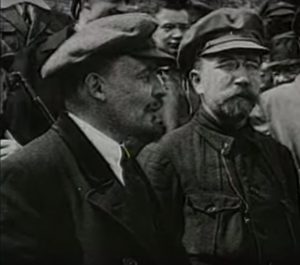 And then they came again, the same people you saw as a kid, but different. New swagger, new patent leather boots, new full length leather trench coats, new fat around their bellies barely held in by their gun belts. You had no chance; the door was kicked in, your crutches flung aside, and then it was all over. Your entire harvest – gone. Masha, the milk cow – loaded up on the truck. The three months old bull calf shot in the head by the unit commander, as was the sow and her entire spring litter. But it was not all. As you were sitting there on the stool your eyes clinched shut, your wife let out a blood chilling scream. The guy in the trench coat was holding her an inch from the ground by her blonde tresses: “where’s the rest of it?” he kept yelling. “There’s nothing else!” she sobbed, but her eyes told a different story. Soon the hidden door to the cellar was flung open and the seeds for next year’s sowing were gone too. “Kulak!” (wealthy peasant), “s veschami!” (with your things!) barked the lieutenant, and so began your journey to beyond the Arctic Circle and the depths of the hell known as the GULAG.

It wasn’t until 1955, after your rehabilitation papers came through from Nikita Khrushchev’s politburo that you saw your hut again. It was home to four families now, none of whom were happy to see you. “There is neither the room nor the need for an old broken down cripple like you”, their eyes were saying. Oh, but you learned a thing or two on that other planet. Your crutch went into action and a few seconds later the men were moaning on the dirt floor and the women huddling in the corner. The Germans came and went. Your son was killed in the first days, in June of 1941, when the Red Army was told by the Supreme Leader, the Sun of Nations to stand down and take no action as the German troops massed on the border. Your daughter was hanged in the village square when she was caught by the Wehrmacht delivering food to the partisans in the forest. Your wife jumped into the pond with a belt of stones around her waist. Not many men survived, but those that did wore blazers weighed down by rows upon rows of war medals. And you? You were an ex-enemy of the people, a useless cripple, a burden on the collective. 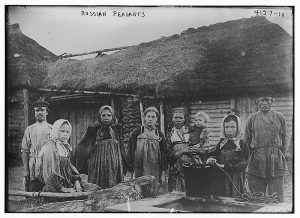 And yet, you survived, long enough to see the whole thing go up in smoke and Lenin’s portraits in the red corners replaced by Jesus and Mary. Ninety years old now, your monthly pension could buy bread for one week, and then not even that. A new wave of anger was building in the countryside. The prince was long gone and forgotten, though his nephew came from England to open a new civic center where the old manor house once stood. He gave a nice speech, unshakeable bonds that bind the Russian people and all that and hopped into the helicopter with his retinue of “new Russians”. You looked around you and in the hard blue eyes of the young men gathered in the hollow under the new center with its soon to be derelict swimming pool and tennis courts you saw the same anger that you felt all these years ago when you could feel no pity for the barin’s young wife and kids. You knew well what would come next and thanked God you wouldn’t have to witness it again.

Fire On The Right