The 52 foot high statue of Vladimir the Great was erected last year near the Kremlin on National Unity Day; Russian President Vladimir Putin reestablished the holiday in 2005. Since Kyiv calls Volodymyr (as he is called in Ukraine) one of its own, and the founder of Christianity in Kyivan Rus, Ukraine was not amused.

However, these photos from a Tsarizm contributor are stunning don’t you think? 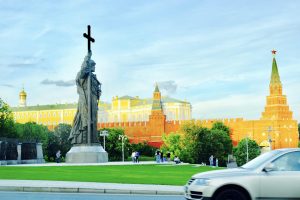