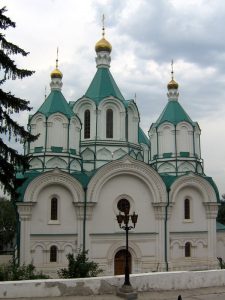 Not many Westerners realize that Russia and the Russian Orthodox Church started to the south with Russia’s slav brothers, the Ukrainians. Kyivan Rus was a medieval empire, based in Kyiv, until overrun and destroyed by the Mongolian hordes from the Siberian steppes.

In 988 A.D., Volodymyr the Great, the ruler of Kyivan Rus at the time, Christianized the pagan kingdom after sending out emissaries all over the world to observe other religions. The legend goes the emissaries returned saying that the Jewish religion was too strict and the Muslim religion banned alcohol, which the king loved. However, they spoke of the Christian cathedrals of Byzantium and remarked they were so beautiful they did not know if they were on heaven or earth. After marrying a Byzantine princess, Vlodymyr converted Kyivan Rus to Christianity.

Every year Ukraine celebrates the event and on July27-28 of this year, they celebrated the 1029th anniversary. “The Baptism of Kyivan Rus,” is commemorated on July 28.

Kyiv declared 10,000 people took to the streets on the 28th to remember the event.