This post is the fourth in a short story that will be told only via fictitious news posts – we hope you enjoy! Watch for the next post of The Colony! 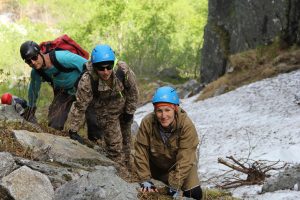 (Siberia) After being sent by Moscow to investigate the strange energy occurrence in Siberia, Russian scientific team descending into sink hole is the headline coming out of the Russian far east. Twelve Russian investigators have arrived on scene and plan on making their way down into the circular cavern tomorrow morning.

“We really have no idea what to expect. We’ve never encountered this much energy concentrated in one location like this before. Right now, there is a zero energy reading on our instruments but we really don’t know what to expect,” said a member of the expedition through an interpreter to Tsarizm news over a satellite phone connection.

At this point, the Russian government is ruling out any foreign assistance in this matter but that may change depending on what the expedition finds tomorrow. Russia has significant expertise in arctic exploration and has made a big push in exploring for natural resources in their northern territories.