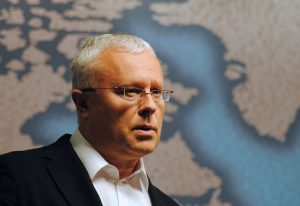 The Russian media outlet Republic.ru reported this week on a conversation with Alexander Lebedev, a Russian businessman and banking expert. The most striking comment made in the interview was Mr. Lebedev’s assertion that at least $100 billion had been illegally smuggled overseas from Russian banks over the last decade. For an economy the size of Russia‘s, that is an extraordinary amount.

Mr. Lebedev was not optimistic about the money coming back either. His main point was that moving these sums of money causes all kinds of money-laundering alarm bells to go off, and questions to be asked to the owners, such as where all the money came from in the first place. Obviously, much of the wealth accumulating in vaults in London, Geneva and other Western financial capitals was ill-gotten gains and won’t be returning anytime soon.

To top it off, the Bank of Russia recently released data on capital flight, reporting that close to $32 billion went offshore, almost double the 2016 total. It seems investors have been scared away by rising repression in Moscow and elsewhere. Western sanctions haven’t helped, either.

Economic growth slowed in Russia toward the end of 2017. Some analysts believe Moscow could be back in technical recession.

“The Russian economy lost momentum in the second half after a very strong first half,” said JPMorgan analyst Anatoliy Shal. “The extreme weakness of the past couple of months comes as a surprise,” Bloomberg reported.

So where will the growth come from for Russia to revive its recovery?

Thankfully, the price of crude oil on international markets rose into the $70 range as the production agreement between OPEC and affiliated countries like Russia has siphoned off the extra supply that caused prices to plummet in 2014. However, this may not last. Russia is already talking about exiting the agreement, perhaps as soon as the upcoming OPEC meeting in Oman.

American shale production is also coming on strong as the U.S. rig counts hit a new relative high this week. The price shock which devastated the North Dakota fields a few years ago has flushed out the weak players and only the strong hands remain. Their price point for profitability is much lower than it used to be and they can turn on extra production much easier than conventional wells. The upshot: Higher oil prices may not be the Kremlin’s savior in the next few years.

There has been a silver lining to the Western sanctions on Moscow — Russia was forced to develop its own manufacturing and production capability in many industries. However, the phenomenon has just started and will have to pick up massive steam to make a difference in the GDP numbers.

Former Russian Finance Minister Alexei Kudrin, a Putin confidant, recommended last year to the president that military spending be reduced and social and infrastructure spending be ramped up to create economic growth. “We learned to easily manage money when there was an abundance of it; what I want to say now is that neither the country’s leadership nor the ministries understand that we have moved into a new reality,” he said in October.

It seems the Kremlin has taken this advice, as construction is booming all around Moscow as new metro tracks are laid and a vast amount of roads are being built. This type of stimulus will probably provide short-term results, as happened in other economies around the world following the 2008 global financial crisis. However, what is truly needed is to diversify the Russian economy.

The Kremlin has made strides in promoting high-tech industries, supporting developments in blockchain technology, for instance. But once again, this will not move the needle over the long term. What is needed is a fundamental attack on corruption and the power of the oligarchs, something the Kremlin is not willing to do.

Perhaps China will step in and take care of Moscow’s money problems. However, Russia would be well to remember that China only takes care of China in the long run.

Baltics In Shock Over Brexit

Moscow Pints Hopes On Pro-Russian Leaders In Moldova And Bulgaria