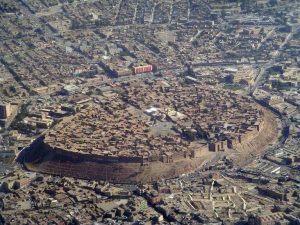 It is always interesting to see the reaction of people, especially from the West, to those traveling to Iraq, whether to the Kurdish part or the rest of the country. “Stay safe.” “Don’t get killed.” “Please don’t go.” “Come back safe.” And then there are the requisite cynical comments, like mocking the food, or mocking the people as all terrorists.

All the comments about Iraq being dangerous, even the ignorant comments about the Kurdish region being dangerous (which it is not), would be fine if these people confined their comments to a stereotype, rather than also judging what is “best” for Iraq. Ignorance of what Erbil is like or Baghdad is understandable because most people have not been there. After all, the concept of “Iraq” conjures up images of beheadings, genocide, people being burned to death, IEDs, VBIEDs, ISIS, Al-Qaeda, Saddam Hussein, chemical weapons, WMDs. Insurgency. Terrorism. Bombings.

So we get it, Iraq is a name that is synonymous with many of the worst things. A failed state, one that has been haunted by endless war since the 1980s. It is the place refugees come from.

So why do the same people who think all this, also express their views on “Iraqi unity” and how they disapprove of Kurds seeking independence. People who think going to Kurdistan is “dangerous” and going to Iraq of course is certain death, will say that they think “it isn’t the right time” for Kurds to have independence. “I oppose a state on ethnic lines and nationalism,” they say. Or “this isn’t a good time for referendum or secession.” The people who say this live in stable western countries and democracies. When they want to travel somewhere they have a passport from a country that allows them to go where they want. But for them the Kurdish region must not violate the “unity” of Iraq and its “sovereignty.” Even though they tend to support referendums at home for places like Scotland, and they supported Kosovo independence and they see no qualms in Puerto Rico seceding, for them Iraq is a concept that is, one and the same time, a failed state that they would never set foot in, and one where the local people cannot leave.

Why do people who would never set a foot in Iraq demand that certain parts of Iraq not go their own way. It is perplexing but it ties in to latent colonial mentalities that view other people as not deserving the same rights as “us.” That means that while Scotland might choose independence, “those people” in Iraq should not. This is paired with the view that while Iraqis who flee the carnage there might come as refugees to “our” country, cannot choose a different path in their country. In its deepest sense this is often because westerners played a major role inc creating the modern borders of Iraq in the 1920s and then invading Iraq in 2003. They tend to think that “we” created Iraq so locals still must not have a decision in its future. These are generally subconscious ideas that are not articulated. Sometimes they hide behind other things, such as “it’s not what’s best for the local people.” But why is it the same people who stood silent during Saddam Hussein’s genocide are so active today on what is “best” for Iraq? The same people who invaded and then abandoned the country, who turned a blind eye to Shia militias, know what is “best” still? Isn’t there a point where perhaps you do not know what is “best” and the local people can and should decide and you should listen instead of always speaking “on behalf” of them?

If you won’t meet the local people, if you are scared to even go there and talk to them, how do you know what is “best” for them? If you conjure up ideas of a country that only involves violence, why do you also think the people living there shouldn’t be able to change it?