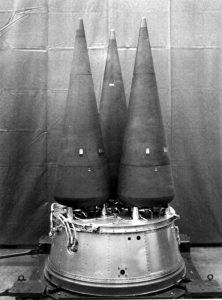 With all the news and threats flying back and forth between Washington and Pyongyang, it is worth drilling down into the historical and geopolitical scenario on the Korean Peninsula and ignore the bluster. With that in mind, there is one truth that Americans need to understand: China and Russia will not stop North Korea from turning into a full-fledged nuclear power.

Why is this? It is because of a very simple truth. The North Korean problem is a useful irritant to the United States. As long as U.S. Pacific forces are focused north of the DMZ, they are not focused elsewhere in the region, like on Chinese aggression in the South China Sea or on Korea’s neighbor on its northern border.

China and Russia also are aware of one simple fact: A united, Democratic, capitalist Korea would be an economic powerhouse that would challenge both countries in the Pacific. That outcome would be a win for the “Western” model and simply unthinkable for these two mismanaged economies.

Beijing is annoyed with Kim Jong-un for needlessly turning the peninsula into a focus of President Trump’s ire. They will attempt to slow down and delay the eventual outcome of a North with nuclear-tipped ICBMs. China does not want regime collapse and the accompanying refugee problem; so, it will just continue to muddle through and do the least it can to superficially help Mr. Trump’s agenda.

On the other hand, Russia is saying one thing and doing another. Moscow is actively helping, not hindering Pyongyang’s efforts. A web of Russian shell companies are shipping contraband material into North Korea, primarily fuel. Russia is still training thousands of North Korean students on transportation infrastructure and other vital subjects for development. North Korean labor working in Russia sends much-needed capital into the Stalinist holdover.

Speaking of Stalin, many people do not realize that North Korea was birthed by the USSR, in other words, Russia. One of Vladimir Putin’s tenants of power is trying to prevent further encroachment by Western allies on its borders. This is another reason Russia will never allow Kim’s regime to be deposed. An armed Korean Peninsula with U.S. troops focused on Russian Pacific forces in conjunction with Japan is simply a bridge too far for the Kremlin. North Korea is a prize from the Great Patriotic War. Russia likes the Korean scenario just the way it is, thank you.

So who has the most to lose in the Korean crisis? We do. There are only a few options. Since Russia and China will never allow regime change, and likely join the fight to stop it, the only option we have is to make it so uncomfortable for Moscow and Beijing that they someone delay or stop Kim’s missile and nuclear program. Although unlikely, this is the only good outcome for us.

The alternative is a deadly war that we cannot afford financially or security wise.

This is why he is driving the U.S. national defense establishment crazy with his bluster and threats. Mr. Trump is always willing to “go there.” It is his ace in the hole — unpredictability. He’s obviously negotiating and attempting to make Mr. Putin and China’s Xi Jinping as uncomfortable as possible, not to mention Kim.

That is why Mr. Trump’s campaign suggestion that Japan and South Korea acquire their own nuclear weapons was such a brilliant, although ridiculed at the time, trial balloon.

This development is the one thing both China and Russia fear and is our, pardon the pun, trump card. A nuclear Japan scares the Dickens out of both capitals. That is a threat that may bear eventual fruit.

Is Mr. Trump’s bravado working? The proof will be in the pudding. It is hard to tell. He will either come out a genius or irresponsible.

However, one thing is for sure, the United States faces a really bad situation and threat from North Korea. Unless Mr. Trump can prevail, we are getting the short end of the stick.