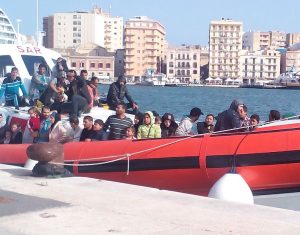 Human smugglers, aided by Soros-backed NGOs, who have flooded Europe with Islamic migrants from North Africa and the Middle East, may have found a new route to avoid new restrictions in the souther EU periphery. The notorious Black Sea is now seeing an increase in ‘refugees’ looking to enter Europe through Romanian shores.

2017 has seen a marked increase in numbers, even though the totals are still relatively small compared to Italy and Greece.

“This seems to indicate that smugglers are trying to find a route through the Black Sea,” Krzysztof Borowski, a spokesman for Frontex, the EU’s border force agency, told AFP. Smugglers are looking for more affluent migrants to pay the fare for the new route which avoids Greece, where arrivals risk deportation under an agreement between the EU and Ankara, explained Mircea Mocanu, head of the International Organization for Migration (IOM) in Romania, reported AFP.

“It is ten times more difficult to cross the Black Sea than the Mediterranean Sea…It’s the Black Sea, not because of its colour but because of the danger during storms,” said Romanian Police Commissioner Gabriel Cerchez. “Until the boat enters the port, it could capsize at any time.”