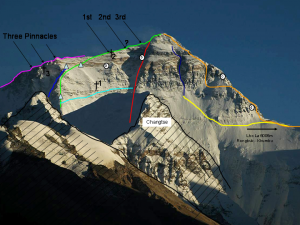 This past May, in order to pump up its new initial coin offering, or ICO, social media giant ASKfm sponsored four experienced Ukrainian climbers to scale Mount Everest and leave behind a wallet containing one million ASKT coins that the company valued at $50,000.

The PR campaign challenged others to make the climb and retrieve the wallet, “if they are brave enough.” A promotional video was then posted on YouTube, in order to inflate the ICO “to the Moon” from the tallest place on Earth. What ASKfm forgot to mention, as it was encouraging others to make the climb, was that a man died during the publicity stunt.

“One of the local Nepalese guides assisting the group, called Lam Babu Sherpa, died making the dangerous trip, even though he was an experienced climber who had reportedly reached the mountain’s peak many times before. A representative from Nepal’s Ministry of Tourism told us he heard the guide had been struck by ‘snow blindness,’ an extremely painful temporary loss of vision caused by overexposure to the sun’s UV rays reflected by ice and snow,” reported FT.

The circumstances of the man’s death remain unclear. The Ukrainian climbers casually stated the Sherpa was following them and simply did not make it down. The man never made to the bottom of the mountain and is now presumed to be dead.

“The famous Ukrainian mountaineer Taras Pozdnii, together with his two friends Dmytri Semerenko and Roman Gorodechnii, conquered Everest in May. This extreme journey to the highest peak of the world (8848 meters) was accomplished with great adversities. They were especially intense during the descent: Taras has got frostbite of his arm and leg, his mask was blown off by a strong wind. Snow blindness began. Taras could walk 20-30 meters with his eyes open only for 20 seconds. At an altitude of about 7 km Ukrainian mountaineers were stuck. There were three of them, and they just had one sleeping bag and a tent. As a result, climbers managed to return to the camp – and then rescue helicopter arrived. But not everyone managed to escape on a helicopter. One of the accompanying Sherpas died in the mountains,” reported Wisc24.

ASKfm’s blog post on the event read, “In a market where launching a blockchain endeavor is not really a newsbreak, companies have to stand out…ASKfm, being one of world’s top 10 social networks and world’s largest Q&A platform, can definitely afford making symbolic statements and drawing attention.” The company also described things this way on its blog, ‘Of course, there were issues… two guys were stuck at above 7,000 meters with no reserve oxygen for all of that time. Under extreme temperatures and unable to descend, they had during the second day to call for a helicopter squad to rescue. ‘

Social media erupted with negative press over the entire, sad incident. If anything, it seems the PR stunt may have backfired; no company wants this type of publicity. Many asked, was pumping the ICO worth the man’s life? Who is going to be held accountable for the irresponsibility of such a campaign?

ASKfm belongs to Ukrainian businessman Max Polyakov, as managing partner of the Noosphere Ventures fund. When contacted by the press, ASKfm denied any responsibility for the death of the Sherpa. As far as we know, the man’s family was not compensated by ASKfm and the company did not present an apology for the disaster.

At the end of the day, it was ASKfm that made the decision to conduct such a stunt, and therefore bears culpability. If additional attempts to summit Everest take place, and there is further loss of life, will the company avoid responsibility then as well?

Cryptocurrency And The Western Balkans

The whole incident raises a raft of questions. As Congress starts to take a hard look at regulating Silicon Valley, perhaps it is worth asking, are the tech giants out of control? This episode adds to a long list of behaviors that have emanated from the Bay Area which beg to be looked at more thoroughly by adult supervision. It remains to be seen if an in-depth investigation will take place of this incident.

“When asked whether or not he felt that ICO marketing stunts had gone too far, ASKfm’s CEO Max Tsaryk said he didn’t think that ICO marketing and standard marketing were dissimilar, and that he felt it didn’t make sense to blame his company for a publicity stunt gone wrong,” reported Business Insider. We think the public may render a much harsher verdict.