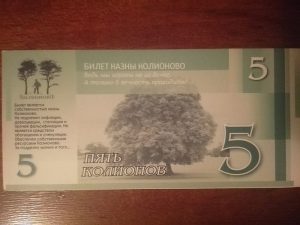 A Russian farmer, and former banker, Mikhail Shlyapnikov, is literally reinventing farm finance in a small village outside of Moscow. Shlyapnikov moved out of the capital a decade ago and initially started his own currency, the kolion, which was eventually outlawed by the Russian judicial system.

“I didn’t want to suffocate and be a slave of the banks,” Shlyapnikov says, putting a hand on his throat. “So I had to invent my own money. And I did it. I’m my own bank, government, regulator,” reported CNN. So he started working on a cryptocurrency version, and in April 2017 raised $500,000 in an initial coin offering (ICO).

The kolion has now changed the farming business in the entire town; it now has a net worth in the millions. Paper money in the village of Kolionovo is scarce.

“We now have about $2 million in kolions because its value has jumped since the ICO,” Shlyapnikov says, adding that the currency is backed by a reserve of 500 bitcoins (worth roughly $3.7 million at current prices). “This way we can attract real money into the business,” and connect the cryptocurrency with the real economy, he added, wrote CNN.

The Russian government has been an early supporter of cryptocurrencies. President Vladimir Putin has searched for ways to enable the industry to grow, seeing Russian human capital as an advantage over other sovereign competitors. Russia has a highly educated work force and the population is fluent in science and mathematics.

“I don’t want to expand because it will bring obligations I’m not ready for,” the farmer says. “I’m not ready to save the world or even Russia, I want to be comfortable and I want to share this comfort with the community.”

How Russia’s Population Has Changed Over The Years