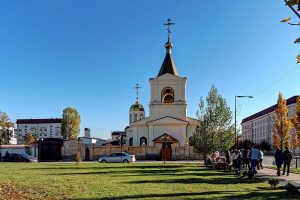 Islamic militants Attacked Grozny’s only Orthodox place of worship, St. Michael the Archangel’s Church, killing at least three, including police guards at the facility. The capital of Russia’s Islamic region of Chechnya has been the center of extremism for some time. It is estimated at least 2,000 Chechens fought with the Islamic State in Syria and Iraq.

Putin’s appointed leader of the region, Ramzan Kadyrov, himself a declared moderate loyal to Russia, commented on the situation. “The militants entered St. Michael the Archangel’s Church, targeting to capture churchgoers,” he said. “All four militants were eliminated in the held special operation.”

“According to the latest information, the militants received the order from a Western country,” he noted.

Kadyrov said that he immediately arrived at the scene of the accident, where he “directly controlled the special operation, which took just a few minutes.” “Measures are being taken to identify the eliminated militants, and the accident site was cordoned off by law enforcement officers,” Kadyrov said.

“One churchgoer was killed in Grozny, and one has been injured.”

Russia fought two wars in Chechnya in the 1990s after the fall of the Soviet Union against Islamic forces in the Caucasus. A case can be made the Vladimir Putin rose to power after his handling of the Chechen situation where Russian troops brutally put down the rebellion.

“Law enforcement authorities have identified all the eliminated militants. Two of them were residents of the village of Geldagan, and one was from the village of Argunsky located not far from Grozny. According to the Russian Interior Ministry for the Republic of Chechnya, the group’s chieftain was a native resident of a neighboring region,” he wrote. Investigative operations continue, he said. “Measures are being taken to identify possible associates of the eliminated criminals,” Kadyrov noted. The situation in Grozny is generally calm, and no restrictions were introduced there, the Chechen head added, reported Russian state news agency TASS.

SOURCE: A Copy Of Hillary Clinton’s Server Exists In Ukraine…It Can Be Acquired For The Right Amount Of Money