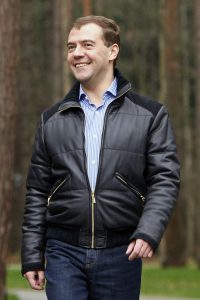 Russian Prime Minister Dmitry Medvedev declared today he is open to targeting specific Americans, or corporate entities, in response to the targeted sanctions by the U.S. Treasury Department against oligarch’s in Putin’s inner circle.

“And in this sense, we will act absolutely symmetrically,” Medvedev said in an interview with the program News on Saturday.

“Earlier, the draft law on the response to the sanctions of the United States and other countries was submitted to the State Duma. The document entitles the government, upon the president’s decision, to introduce 16 different responses. Including – to prohibit or restrict the import of agricultural, alcoholic and tobacco products, as well as medicines from certain countries. In addition, the document provides for the possibility to prohibit or restrict the export of rare earth metals from Russia, to suspend cooperation on the atom, aircraft building and rocket engines,” wrote RIA.

Medvedev is also reported to have stated that it should be a criminal offense in Russia to follow American sanctions. This would seem to say that oligarch Oleg Deripaska, who just agreed to reduce his stake in his holding company to below 50%, in order to secure the lifting of sanctions against aluminum-maker Rusal, should be criminally prosecuted.

The response to recent, severe American sanctions from the Russian government has been mixed at best, chaotic and unfocused at worst. The Trump White House has imposed significant financial restrictions on Russian individuals and companies after the recent nerve gas attack in the U.K, the chemical weapons attack in Syria, and the continued crisis in Ukraine.