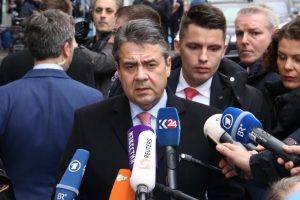 This year the Munich Security Conference seems to producing some interesting comments. In a stunning departure from his own Chancellor Angela Merkel’s position, German Foreign Minister Sigmar Gabriel said that it is ‘not realistic’ to insist on full implementation of the Minsk agreements before some sanction relief is provided to the Russian Federation by the European Union. He colored the remarks saying this progress should be in the form of a ceasefire implemented by United Nations peacekeepers.

“He said he realised his view differed from the official position – that sanctions could only be eased when the Minsk peace accord was fully implemented – but said it was in the world’s interests to break the current impasse,” reported Reuters.

“We need progress urgently because the world is becoming more dangerous,” Gabriel said with Russian Foreign Minister Sergei Lavrov in the audience. The foreign minister said a plan to use peacekeepers to end the violence was ‘one of the few realistic options’.

“Gabriel also defended plans for the Nord Stream 2 gas pipeline that would connect Germany and Russia under the Baltic Sea, a project bitterly opposed by Poland, Ukraine and Baltic states on concerns it would increase Europe’s dependence on Russian gas and could cut off Ukraine from gas transit fees,” wrote Reuters.

It seems the Kremlin’s efforts to widen cracks inside the EU and the NATO alliance is working as Germany wants trade in lieu of security concerns by Eastern European nations.

Russia’s Nuclear Arsenal To Be 90% Modernized In Late 2020