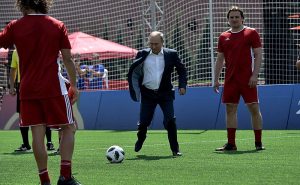 “Football players of the Russian national team in a series of penalty shootouts defeated the Spanish team and for the first time in history reached the quarterfinals of the World Cup.

“The main meeting time at the Moscow stadium “Luzhniki” ended with a score of 1: 1. At the 11th minute defender of the Russian national team Sergei Ignashevich struck his own goal, and on the 41st minute Artem Dzyuba from the penalty spot restored equality. In extra time, the teams were not able to hit each other’s gates, and in the penalty shoot-outs the Russian players – 4: 3 turned out to be more accurate.

The rival of the Russian national team in the quarterfinals will be determined in the match of the teams of Croatia and Denmark, which will be held later on Sunday in Nizhny Novgorod. The quarterfinal meeting will be held July 7 at the stadium “Fisht” in Sochi,” reported Russian news outlet RIA Novosti.