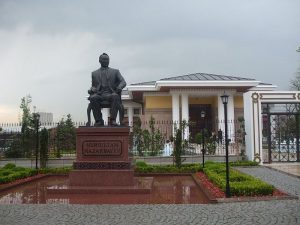 Belarus reacted harshly to the president of Kazakhstan, Nursultan Nazarbaev’s offer to move the Ukraine peace talks from Minsk to Astana.

“The negotiations’ venue is hardly relevant,” Belarusian Foreign Minister Vladimir Makey said. “The negotiations on Ukraine could even be moved to Antarctica if there is a certainty about their success,” reported Associated Press.

He added that Belarus was not “seeking peacemaker’s laurels unlike some others.”

“We are not interfering in this [Minsk] process,” Kazakh Deputy Foreign Minister Erzhan Ashyqbaev said. “However, Kazakhstan is always ready to give full support to find solutions.”

“Ashyqbaev told reporters in Astana on January 22 that his country does not doubt the importance of the Minsk negotiating platform, and “respects” the peace accords inked in the Belarusian capital,” reported RFERL.

“Nazarbaev said while on a visit to the United States that he discussed the conflict during a meeting with Donald Trump, and that the U.S. president suggested moving the talks to another location,” reported RFERL.

The attempt by The White House to move the venue could be a strategy to elevate Kazakhstan as an ally and remove the Ukraine talks from Belarus, a co-member of the Union State with Russia, where Putin has more influence.

The Kremlin was characteristically vague about the issue, “Russia isn’t a party to the conflict,” spokesman Dmitry Peskov said. “Russia will adhere to the letter and the spirit of the Minsk agreements along with other countries guarantors. We stand for the implementation of the Minsk agreement to settle the internal Ukrainian crisis.”