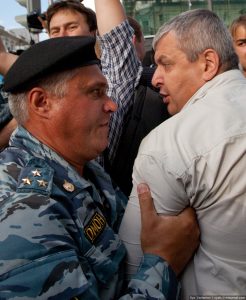 Late last year, Moscow news media reported that an armed man had taken hostages at a candy factory in the city and killed a guard. The alleged shooter turned out to be a former owner of the factory, still fighting for control of it. He told Business FM before his arrest that he was resisting a raid staged by law enforcement agents to seize the business. In court he said he had killed the guard in self-defense. He is now in remand prison, or pre-trial detention, pending the results of an investigation.

His claims struck a chord in Russia, where innumerable business owners, company managers, lawyers and other professionals have spent years in detention and lost their assets, their health or even their lives to a widespread culture of prosecutorial excess…