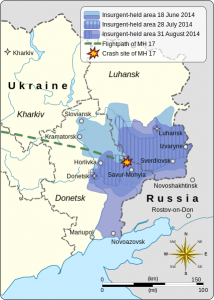 “I hail heightened interest, both in Ukraine and aboard, to supplies of Javelin systems to us. I can only confirm that the weapons we have been waiting for so long have arrived in Ukraine. And have reinforced the strong containing effect of our combat capability and Euro-Atlantic security,” Poroshenko wrote on his Facebook page reported Russian state news agency TASS.

“I am sincerely grateful for the fair decision of [U.S. President] Donald Trump in support of Ukraine, in defense of freedom and democracy…to strengthen our defense potential in order to repel Russian aggression,” he added.

The Ukrainian leader also announced today a change in the Ukrainian military’s operations in East Ukraine. “Starting from today, April 30, 2018, a large-scale anti-terror operation in the territory of the Donetsk and Lugansk regions is coming to an end,” Poroshenko said. “Now we are starting a military operation led by the Ukrainian Armed Forces to ensure protection of territorial integrity,” reported TASS.

The announcement seems to be acknowledgement that heavy fighting has ceased and the military goal in the region is changing to one of security and stability.

What A New Caspian Sea Accord Will Really Mean