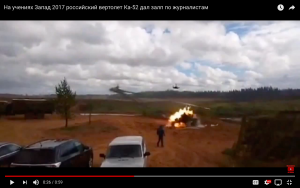 The Russian internet portal 66.ru posted video of two Russian attack helicopters firing on journalists during the Zapad military exercise reportedly at the Luzhsky range near St. Petersburg, Russia. The Moscow Times reports an unnamed military source said the incident was a mistake “and the missiles blasted off on their own.”

“At least two cars burned down, two people were seriously injured, they are now hospitalized,” the source said. “The victims were most likely journalists.”

The Russian Defense Ministry denied the reports, sort of, saying, “all social media messages about ‘rounds on a crowd of journalists,’ ‘a large number of seriously wounded’ are either a deliberate provocation or someone’s personal stupidity.”

“[Video footage] recorded an event that occurred at another time, when army aviation helicopter crews practiced ground attacks as part of a tactical exercise.”

The press service also said that a helicopter engaged the wrong target accidentally, which happens in all militaries. That is more likely the case than missiles firing on their own. It is likely some poor, young pilot just lost his career.