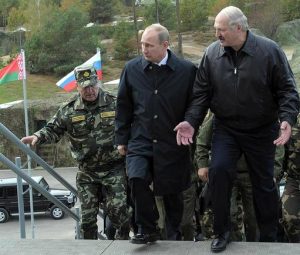 NATO is sending three monitors to the Zapad (West) 2017 military exercises with Russian and Belarus, which runs from Sept. 14 to Sept. 20. The annual event has caused much worry among NATO commanders as concerns over perceived Russian aggression and the pre-positioning of equipment near the Baltic states grows. Moscow says the event will involve less than 13,000 troops and therefore only three monitors are allowed per treaty. NATO fears the number could be much higher.

“NATO spokeswoman Oana Lungescu said the three experts will attend “Visitors’ Days” in Belarus and Russia after they were invited to attend…international rules permit monitors to have much wider access, including briefings on the exercise, opportunities to talk to soldiers and overflights,” wrote Associated Press. “Russia and Belarus are instead choosing a selective approach that falls short. Such avoidance of mandatory transparency only raises questions about the nature and purpose of the exercise.”

Secretary-General Jens Stoltenberg wants the ‘Vienna Document’ amended for ‘snap exercises’ to be faced with ‘snap monitoring.’ Russia has increased the use of snap exercises over the last few years as tensions with the West have grown over Russian actions in Ukraine. The treaty was created by the Organization for Security and Cooperation in Europe.

“It’s especially important now, because tensions are higher than they used to be. There is more military activity, more exercises and therefore it’s even more important that we avoid incidents and accidents or misunderstandings,” he told The Associated Press on Friday, in Orzysz, Poland.

Russia’s Deputy Defense Minister, Lt. Gen. Alexander Fomin rejected such fears, “The most improbable scenarios have been floated…Some have reached as far as to claim that the Zapad 2017 exercises will serve as a ‘platform for invasion’ and ‘occupation’ of Lithuania, Poland and Ukraine.”