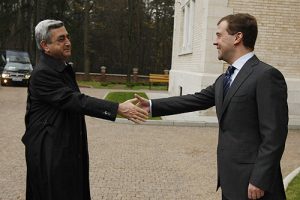 Thousands of jubilant Armenians have poured into Yerevan’s main square to celebrate the resignation of Prime Minister Serzh Sarkisian, who stepped down amid widespread street protests over his election to the newly powerful post following 10 years as president.

In a dramatic turn of events a day after he had rejected opposition demands for his resignation, Sarkisian made a pointed and direct statement to the country on April 23, saying that he was acquiescing to calls from protest leader Nikol Pashinian and the demonstrators the opposition lawmaker has led for 11 days and leaving office.

“The movement of the street is against my tenure. I am fulfilling your demand,” Sarkisian said in a statement on the prime minister’s website.